The answers to 13 questions

I'm sort of in the mood of writing reviews this week. Continuing from the previous post, this entry is a book review.

When the movie Slumdog Millionaire won this year's Best Picture oscar at the Academy Awards a few months back, I spotted the book on which the film is based in a bookstore. I thought I would give it a read before catching the movie although there's a likelihood that I could be disappointed with the movie later on. It is the sort of thing that happens when you watch a film based on a book that you have read.

Anyway, the original book written by Vikas Swarup was titled Q&A. Not really an inspiring title, I must say, but Slumdog Millionaire doesn't sound that enticing either.

Slumdog Millionaire is the story of a young man who works as a waiter in Mumbai, India. He is an orphan who goes by the name of Ram Mohammad Thomas. How he can have a name that reflects three different religions is neatly explained in one of the earlier chapters. It gives us, the readers, an early introduction of the racial and religious sensitivities prevalent in present day Indian culture.

Ram (or Mohamad, or Thomas, whichever you fancy) enters a TV quiz show called Who Will Win A Billion or W3B for short. The quiz follows the same format as the real-life TV show, Who Wants To Be A Millionaire, the Indian version of which was hosted by the popular actor Amitabh Bachan. In W3B, the contestant can win a cool one billion Indian rupees (over RM72 million at current exchange rate) by answering 12 questions correctly.

Ram in fact, answers all 12, well actually 13 questions correctly but rather than getting the prize money, he is arrested and thrown into a prison cell. The police, acting in cahoots with the quiz show organizers, suspect him of cheating because there is no way a waiter from the slums of Mumbai can know the answers to all the questions.

The book starts with a prologue of Ram in the prison cell. His captors torture and beat him up, in a bid to force Ram to reveal how he knew the answers. But Ram says he just knows. The police is not happy and the torture continues...

This book is not about the story of the quiz show per se, but rather about the life of our protagonist during the different periods of his growing-up years in various cities in India. Vikas Swarup has brilliantly used the backdrop of a quiz show to tell us this story. The life story of Ram Mohammad Thomas is not presented chronologically but follows the sequence in which the questions of the quiz show are asked. The heading of each chapter is the value of the prize to be won for giving the correct answer, starting at 1,000 Indian rupees (roughly USD20 or RM72). The chapter then starts with a story of a particular event in Ram's life, told in flashback. At the end of the chapter, we return to the present... in particular, to the TV studio scene where the quiz show host, Prem Kumar, relays the question to the contestant. When we relate back to the story we were just told in flashback, we immediately understand why Ram is able to answer it.

And so the story goes, question after question, all correctly answered... and the host continues to be dumbfounded. The tension builds as the prize money climbs higher and higher. The show organizers become nervous and they contrive to trick Ram into answering the last question incorrectly. I will not reveal how this is done but it caused our hero to face a thirteenth question before he can claim the jackpot.

I have made a summary of the quiz questions with the corresponding multiple choice answers. Click on the graphic below if you wish to know what they are. You may wish to attempt them yourself because I have not indicated the correct answers. Some questions relate to fictional characters and/or events... so please don't dream of hitting the jackpot :-) 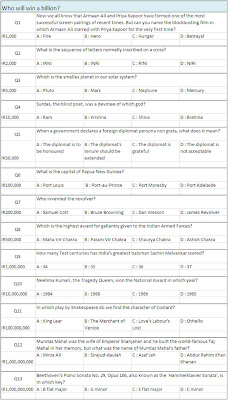 Swarup has cleverly weaved different subjects within the fabric of his story about the amazing adventures of an orphan in India. While the book has been renamed Slumdog Millionaire, it is not purely about struggling for a living in the slums of Mumbai. There are stories on forced prostitution, child-beggar syndicates, life of Bollywood's rich and famous, train robberies and even vodoo. Ram's adventures takes us from Mumbai to Delhi to Agra and back to Mumbai. There is a final twist to the tale. Ram did not enter the quiz show with the intention of winning the prize money.

Generally, I find the book a good read although there are inevitably a few passages that are difficult for me to picture because of the intricate Indian settings. I guess, such difficulty would not arise if I am a Bollywood movie fan, of which I am not. Nonetheless, I enjoyed the book immensely.

Vikas Swarup is a diplomat in the Indian Foreign Service. This is his maiden novel and it has made bestseller list. In this respect, he is similar to Afghan doctor-turned-writer Khaled Hosseini, whose first book, The Kite Runner, also became an international bestseller. The Kite Runner was also made into a movie, which I have previously written about -> For you, a thousand times over...

These two gentlemen is giving me hope that one day, I might be able to come up with my very own novel too.

Differences between book and movie

I have not yet watched the movie, so I can't really say what the differences are. However, I have read some of the movie reviews and from these, I gather that there are quite significant changes. First and foremost, the hero in the movie is now called Jamal Malik, a Muslim. Secondly, the jackpot prize in the movie is IR20 million. Let me watch the film and perhaps I can update this post with my views on the movie itself.

Update 6 July 2009 : I have watched the movie over the weekend. While the underlying story is still there, the plot has many significant changes. To put it simply, the movie is good... but the book is better.

The general observation therefore, still stands... that I tend to be disappointed watching a movie that's based on a book that I've read. I wonder if the reverse is true, i.e. would I be disappointed reading a book whose movie version I have already seen? Perhaps I'll test this with `Angels and Demons'. I've seen the movie but I'm mulling about reading the book.
Posted by Oldstock at 23:02

Email ThisBlogThis!Share to TwitterShare to FacebookShare to Pinterest
Labels: books

Yes, I think you'd be a good reviewer. Correction - EXCELLENT. :)

i suka the budak kecik azharuddin in the movie. so comel

Which is why i stopped watching the movie after 20 mins... I want to read the book first :-D (but haven't gotten my hands on one yet).

I like to think my imagination is better than any movie and an author's brilliant description of and event can never be replicated in a movie. There are just too many details that a movie has to forego.

I have been thru this over and over... being disappointed by the movie of which the book I have read beforehand. Some suggested that I watch the movie first, then read the book but then that will take away all the fun of reading when you already know the ending!

And yes, agree with Ki Moira... that azharuddin is so cute, not to mention talented!

Kalau hang tak nak baca buku yg sentimentol mcm ni, hang pi cari satu buku lama bertajuk The Book of Heroic Failures by Stephen Pile. It's a hilarious look at falied attempts at doing things. I wrote about this in one of my earlier posts.

Moira, I'll watch the movie to see if I agree with you :-)

Generally, it's true. We get disappointed when we compare the movie to the book. So, avoid being disappointed, I try to treat the movie as a separate intepretation of what I've read and try not to make comparisons with what I pictured in my mind. Of course, easier said than done.

So far, the best screen adaptation of a novel I've seen is Shawshank Redemption. There are subtle changes in the movie which, I think, makes it better than the book.

thank you for a very good review on the book, of which I have got the chance to read yet.

I watched the movie and the best part was when the little boy jumped out from the locked-toilet into a pool of human feaces (including his own), to greet his hero, Amitabh Batchan :)

I have not read the book nor seen the movie but I have gone through the 13 questions you so graciously put up on your blog.

And I cannot answer any of them (I don't think Pluto is a planet anymore, so no... Pluto is not the answer to "Which planet is the smallest in our solar system?"

Azharuddin plays the young Salim (the one who grows up to become a gangster). The cute one, I think is young Jamal, played by Ayush Mahesh.

Yes, that was a very funny scene. When young Jamal got locked in that toilet and was struggling to get out, I sort of guessed that he'll try to squeeze out of the hole in the floor but I didn't expect him to jump right into the shit!

Strangely, Amitabh Bachan wasn't put off by shit-covered fan asking for his autograph, heheheh... He surely must have smelled awful!

BTW, this scene is not in the book.

Nice of you to drop by. I was thinking of putting up the answers, if you are interested, at least for the factual questions only.