I'm wondering myself, why the near total absence in writing. This is not good. Hopefully things will improve in 2020.

Let's close this year with an update of my granddaughter. Maisarah was about a year old when this pic was taken. She's 15 months-old now and quite a handful. 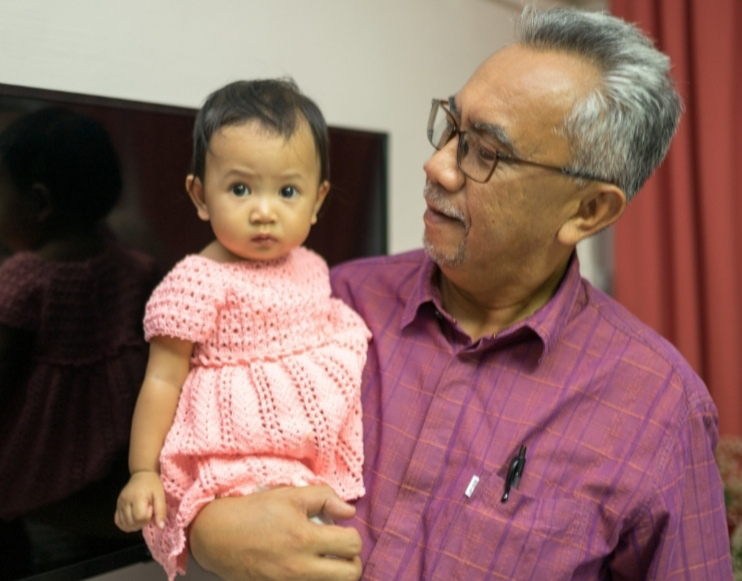 Happy new year to all friends and readers. May the Almighty bless you with good health for all the 366 days of 2020.
Posted by Oldstock at 23:51 No comments:

Email ThisBlogThis!Share to TwitterShare to FacebookShare to Pinterest
Labels: family

A new ride in the new year

In early December last year, my business partner decided that it was time to change the car that he had assigned to me. The Toyota Fortuner that I was using was more than 8 years old and was full paid-up. Actually, there wasn't much issue with the Fortuner. It had been regularly maintained, bodywork still in reasonable shape and drives well. Except that it had clocked a fairly huge mileage run and has a very thirsty engine.

The original idea was to trade it in for the latest Fortuner model but upon receiving feedback from friends who already own one, the new model petrol consumption figures aren't any much better. My business partner then asked me to suggest other alternative SUVs that are more suitable.

The first car that came to my mind was the Mitsubishi Outlander. It is not a very popular car... you hardly come across it as you drive along the highways. More likely for you to spot other mid-size SUVs like the Honda CRV or even the Mazda CX5.

I thought of the Outlander because of an advert I saw in a movie theatre. It showed an alien spaceship floating stationary over somewhere on Earth while facing a group of humans, presumably in telepathic negotiations. On being asked what the aliens wanted, a remote car key was lifted off the pocket of one of the humans by invisible forces. The man managed to grab the key before it floated out of reach. He then ran to his car and quickly drove it off. The said car was the Outlander.

Really good commercial. Talk about the influence of advertising. By the way, I tried searching for a video of that commercial but could not find it.

Anyway, to cut a long story short, I went to a Mitsubishi dealer to check out the car and arrange for a test drive. Mitsubishi was offering an attractive rebate to the already competitive price. At the same time, I checked online for independent reviews from local motoring websites. Turns out that the Outlander was voted the best family SUV by the Cars of Malaysia for 2018.

I've been driving the car for a few weeks now and I truly like it. I hope it will continue to give me a good run.

A lovely start to the new year.

Posted by Oldstock at 22:27 No comments: