Whisper to the sky 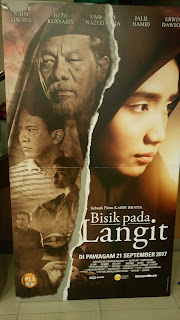 The literal translation of this Malay idiom is that taking care of a herd of cows is much easier than taking care of one daughter. I personally wouldn't know about that because I have three sons and no daughters. But I guess there could be a grain of truth in it, otherwise our wise old folks would not have mentioned it.

It has been a few years since I last watched a Malay movie at the cinema. There are not many locally-made films that spur my interest. In a way, I'm not an ardent supporter of the local movie industry, which is actually a sad thing. I hope to put things right in this respect from now on but at the same time, I really wish Malay filmmakers would correspondingly improve their product too.

Bisik Pada Langit is a beautifully touching movie. It tells the story of a father's unconditional love for his only daughter, perhaps at the expense of the other male offspring. The plot is simple, the dialogue uncomplicated and the scenes are short and crisp. The efficient use of flashbacks to tell the background events help sustain interest.

The lead role as patriarch of the family is played by Jalil Hamid. While more well-known as a comedian, I truly like to watch Jalil's skillful acting in dramatic roles. In this movie, he shows his ability through a whole range of emotions : joy, affection, impatience, anger, despair and sorrow.

Go watch this film at the cinema and support our local films. Be prepared to shed a tear or two...
Posted by Oldstock at 22:38 No comments:

Email ThisBlogThis!Share to TwitterShare to FacebookShare to Pinterest
Labels: movies

Sometimes things that you have planned for, do not turn out the way you wanted it to. Not all factors are within your control. So when things don't go according to plan, you either adapt, modify or abandon it altogether.

The 8th part of this series was another trip to Negeri Sembilan. We were on our way to Kuala Lumpur and I had intended to make a detour to visit the Rembau Museum located in a small village known as Kampung Astana Raja. The museum is built in the Minangkabau style and is said to be a replica of the palace of Raja Melewar, the first king of the state. However, I had miscalculated my travelling time from Johor Bahru and arrived at the site when it was already closed for the mid-day break. Since it was also a Friday, the mid-day closure was a little longer than normal to allow for Friday prayers. It was also raining during the latter part of my journey which caused me to drive at a slower pace.

With the museum closed and the bleak weather not permitting me taking a decent picture even from the outside, there was nothing much I could do but to proceed to find a mosque and stop for prayers. Before doing so, I searched for the grave of Raja Melewar, which according to Google Maps, is located within the same vicinity. I easily found it since it was just by the road side but I was very surprised when I saw it. As viewed from my car (I did not step out due to the rain), the cemetery is not as grand as the other royal burial sites I have been to. Maybe I'll explore and elaborate on this if I do stop by this location again in future.

This entry therefore has been revised to write about a particular eatery that I first discovered in May this year. I know it seems a bit off-tangent to be writing just about a makan place as a destination to visit but I've had it my mind to introduce this restaurant for quite some time now. The original idea was to write about a few good makan places located just off the North-South Expressway that are worth making the detour. However, I'm so satisfied with this place that I've decided it merits a blog post entirely on its own.

After Friday prayers at Masjid Dr Hj Mohammad Eusuff Teh, we proceeded along Route N9 towards the Pedas/Linggi interchange of the NSE. Just before the interchange, we stopped at our favourite `nismilan' restaurant known as Kedai Makan Pak Raub.

I first got to know of this place in a Facebook posting by a group calling themselves Anak-anak Negeri Sembilan. Since our first visit, I have now planned my northbound trips to include a lunch stop at Pedas/Linggi whenever possible.

Kedai Makan Pak Raub serves traditional Negeri Sembilan kampung-style dishes that are simply delicious. Nismilan cuisine is generous in its use of coconut cream (santan) and is hot and spicy to boot. All the well-known dishes are there, I'll just name a few : daging salai masak lemak cili api, ikan keli bakar, kambing gulai kawah, telur itek masak lemak, gulai ayam kampung plus a whole host of veggies cooked in santan. I have yet to come across a dish that does not agree to my taste.

To quench the fire of the spicy dishes, you can help yourself to the iced rose-syrup drink offered for free. Drink as much as you want. If you cannot take iced drinks, plain warm water is available too at no charge. I don't actually know if they sells other drinks because I've never found the need to order them.

In my view, what makes this place so special is the man himself. Pak Raub is an amiable old man who greets his customers cordially, invites them to self-serve the dishes on display, encourages second helpings at minimal charge and really want customers to enjoy their meal. While I've been his customer a few times, I doubt he remembers me but his greetings and welcome make me feel like I've known him a long time.

Kedai Makan Pak Raub is a simple, no-frills family-run eatery located by the roadside. The food taste marvellous. Seating area is clean and comfortable enough. Price of meal is still at kampung-level, which is to say, ridiculously cheap when compared to Johor Bahru or Kuala Lumpur. If you are coming from the NSE, exit the highway at Pedas/Linggi interchange (Exit 223) and turn left after the toll plaza. The shop is only about 2 minutes away on your left. Try to come before noon if you wish to avoid the crowd. Closed on Mondays.

The shop is alternatively known as Kedai Kuih Kak Wok and they even have a Facebook page. Why this alternate name? Because they sell a variety of kuih as well.

Posted by Oldstock at 23:40 No comments:

An old name for Great Britain

In the English Premier League football competition, I support Liverpool Football Club. I first became an LFC fan when I studied in the UK in the 1980s. Last Saturday, they played against Manchester City and got the worst drubbing that I can ever remember watching. After the exhilarating game against Arsenal the previous fortnight where the Gunners were trounced 4 to nothing, last weekend saw Liverpool on the receiving end of a City goal-scoring spree.

Damn it hurts... but I guess if you are able to dish it out, then you should be able to take it too.

The only other team in EPL that I would consider myself a supporter of is West Bromwich Albion, although I cannot call myself a die-hard fan. I became a supporter of WBA much earlier that LFC, when I was still in secondary school. The main reason for my attraction to Albion was a certain player named Bryan Robson. A stylish and hardworking midfielder, Robson later transferred to Manchester United where he enjoyed a successful career. He also became captain of the England team.

After watching the horrible Liverpool team display on Saturday, I then switched to watch the later game of West Bromwich Albion versus recently-promoted Brighton & Hove Albion. As it turned out, the new boys BHA defeated WBA by 3 - 1. A rotten Saturday of EPL football for me.

Anyway, the item that caught my interest was that two teams with `Albion' in their names are playing against each other, the first time I've come across it. This caused me to look up what `albion' means.

According to Wikipedia, Albion is the oldest known name for the island of Great Britain. The name is ancient Greek in origin (as opposed to Britain, which has Latin roots).

Okay then... enough of rolling in sorrow and looking forward to next week's game.
Posted by Oldstock at 18:55 No comments: