The past weekend was spent at the wedding reception of my nephew held at his parent's home in Rawang, Selangor. Rather than post more wedding photos, I thought it would be better if I upload pictures taken while we were at Kedah and Perlis the week before.

While the groom and his family headed back to Rawang after the ceremony at the bride's place in Alor Star, we decided to drive a bit further north to Kangar in Perlis to stay at another brother-in-law's place.

We spent two days in Kangar. The first night, my BIL took us out for dinner at Kuala Perlis. We had our fill of fresh seafood. The next day, lunch was at this popular makan place called Anjung Keli. While I do not eat ikan keli (freshwater catfish), my sons love them. Later in the day, my BIL took us to Padang Besar where I bought some imitation football jerseys for my sons.

When we left Kangar the following day, I decided to take the old road to Alor Star rather than the highway, just for adventure. This journey took us past beautiful landscape of paddy fields stretching as far as the eye can see. The scenery reminds me of another Malay proverb that I have used as a title for this post.

A few kilometres before reaching the town of Alor Star, I spotted a roadsign showing the way to Kota Kuala Kedah. I decided to make a detour and was pleasantly surprised to come across a site of historical importance. 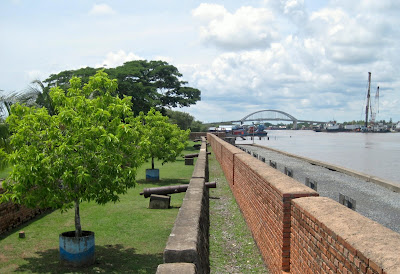 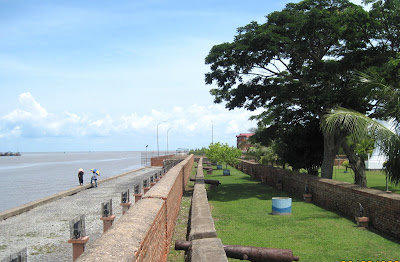 Downstream view from Kota Kuala Kedah towards the sea 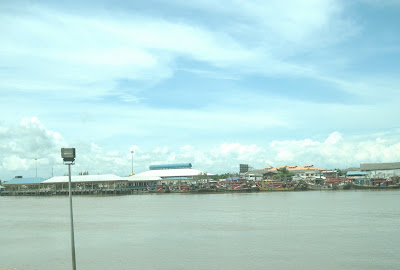 Kuala Kedah town and fishermen's jetty on the opposite bank
Kota Kuala Kedah is an old fort built in the early 17th century during the reign of Sultan Sulaiman Shah II. It is located on the north bank at the Sungai Kedah rivermouth. The ruins of the fort is now maintained as a tourist attraction. 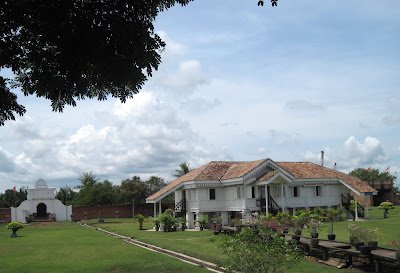 The old Shahbandar's house has been converted to a tourist information centre. Note the old Portugese gate in the background. 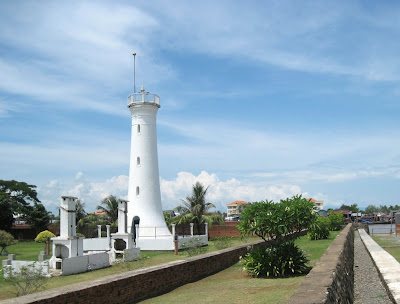 The old Kuala Kedah lighthouse within the fort compound

After making a quick tour of the fort, we went to look for a place to have lunch. I saw a large signboard of a newly-opened eating place called Restoran Bahtera Nelayan. The way to this restaurant took us along small winding roads right on the edge of some paddy fields. When we finally reached the place, we found a new building built next to the river with part of the structure standing on piles by the water's edge. A wooden jetty connects the building to the river, past some mangrove trees. It was quite a peaceful setting. 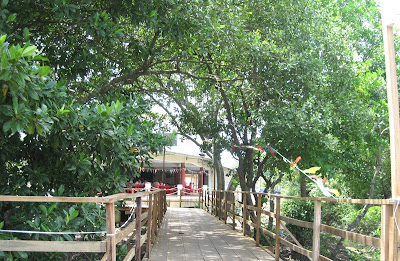 Wooden jetty connecting the restaurant to the river's edge 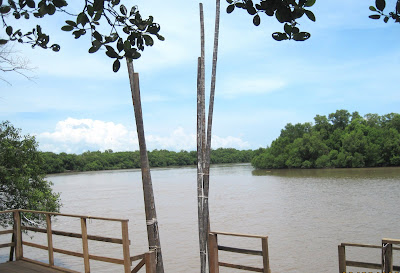 View of Sungai Kedah from the wooden jetty
The restaurant is managed by the local Persatuan Nelayan Kawasan Kuala Kedah and of course, serves mainly seafood. Since I was in the adventurous mood, I had the waitress recommend they way the dishes should be cooked. We had ikan jenahak bakar basah, udang sambal thai and ikan sembilang masak gulai asam.

The bakar basah style refers to grilling the sambal-coated fish in a pouch of aluminium foil. This way, the moisture and flavour is kept within the pouch. The prawns were cooked in a spicy hot sauce that I have never tasted before. The ikan sembilang (saltwater catfish) which I also do not eat, was my son's choice. It was cooked in a simple sour soup not unlike tomyam but not quite. Also somewhat similar to asam pedas but not quite too. The soup contained cubes of keledek (sweet potato) to give the dish a hint of sweetness. A truly unique taste of gulai utara. 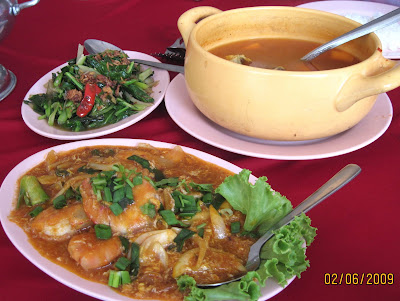 Udang sambal thai, gulai asam ikan sembilang and kailan ikan masin
All the dishes tasted delicious and the price was reasonable too. It was worth the trouble driving along the winding lanes to search for the place.

The lovely lunch meant that the driving back to Kuala Lumpur would be tough journey. We left Alor Star and entered the North-South Expressway to head south. We safely reached KL, made a brief stop at a sister's house before driving onwards to Johor Bahru. The full stretch from north to south in a single day.

On the whole, it was a very tiring trip but a very memorable one too.
Posted by Oldstock at 22:02

What a wonderful journey. I haven't got a chance yet to explore the norther territories (Kedah and Perlis). The nice travelog and your experience really excite me, especially that restaurant on the mangrove.

wow! U drove all the way from aloq staq to Johor in one day!

When I was small, my mom, my sis and me used to frequent alor setar and butterworth road. Bila lalu terusan wan mat saman (betul ke..) i selalu teringat my buku sejarah!
The padi fields memang sehijau mata memandang tapi yg tak syok tu bila lalu ladang getah coz bau busuk! he he..
Dulu kalau tak silap, it took us like 2 and 1/2 hrs to reach alor setar from butterworth in my mom's mazda 808. It has been ages since I last been to Kedah!

This is my first time exploring Kedah and Perlis. I have been to all the other states in peninsula. The few days spent there is not enough. Hopefully there is a next time.

The drive from Kangar back to JB was aided in part by the missus. Kalau sorang-sorang rasanya tak larat.

We didn't have that much time to explore Kedah. I wanted to stop by Masjid Albukhary tapi tak sempat. Terusan Wan Mat Saman pun tak dilihat dari dekat. In fact I have old school friends in Alor Star but couldn't meet up with them.

The trip to Kangar was actually not planned because I could not take too long time off work. That's why we didn't go to many places. Mana yg sempat je. I'll remember about the nasi ganja next time I visit Kangar.

Sorry, one question - what does "Baik membawa resmi padi" mean?

I will not even attempt to translate the full proverb. Suffice perhaps, if I give the essence of the meaning : As we grow older and smarter, it is better for us to remain humble (as opposed to becoming more aloof). The analogy with the rice plant here is that as the rice grains develop, the plant bows lower to the ground.

If my other readers can help explain, I'd be most grateful too.