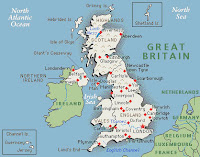 Here's another post on the English language but this in a less serious note. But before I tell my story, a bit of background on the land of tea and biscuits, our former colonial masters, the United Kingdom.

The United Kingdom is a nation made up of four distinct and culturally different countries; England, Wales, Scotland and Northern Ireland. Politically, they are one nation but not quite a federation like Malaysia or the United States. They do however, have the advantage of sending four separate teams to qualify for the football World Cup. Their full and proper name is The United Kingdom of Great Britain and Northern Ireland. Quite a mouthful, right?

All the people of the UK speak English of course, but with distinctive accents. If you have lived in the UK for some time, it is not terribly difficult to distinguish them. I did my A-levels at a college in Wales and am therefore familiar with the Welsh accent. The Welsh, in fact, do have their own written and spoken language but I can hardly speak a word, despite having lived there for almost a year. It is a language that makes miserly use of vowels and for a foreigner like me, even reading a sentence is next to impossible. Might as well have been Greek.

Of the three non-native English countries, the Scottish accent is perhaps the most difficult to comprehend. I won't even attempt to describe it. If you are a Man United fan and have seen Sir Alex Ferguson's interviews on TV, you'll know what I mean. I'll give you full marks if you can fully catch what he says in the first instance.

Okay... now back to the story that I wish to tell.

In 1993, or thereabouts, I was working in a consulting engineering firm carrying out a project in Johor Bahru. Our site management team included two very experienced British expatriates. Jim Payne, our Project Manager, is an Englishman while the other Brit is a Scotsman named David Morgan. Mr. Morgan was our Senior Project Engineer who was primarily in-charge of site construction matters. He's a real hands-on guy with a no-nonsense approach.

Mr. Payne on the other hand, is a cool and composed gentleman not prone to any temperamental outbursts. He has worked in many countries before settling for a final project in Malaysia. I reported directly to Jim and assisted him in the project management tasks, especially in liasion with local counterparts. I learned some of my report-writing skills from this kind man.

One particular afternoon, Jim and I were in the office discussing about work when David stomped in with a pissed-off look on his face, grumbling loudly about something.

David immediately went into a tirade about bloody this and bloody that and bloody everything else, mumbling and grumbling all the way. This went on for a few minutes and included some choice words that I rather not repeat here.

At the end of David's outburst, Jim turned to me with a puzzled look on his face and asked, `What did David just say?'

I couldn't stop myself from grinning! I sort of caught the gist of David's rant and proceeded to explain to Jim in plain and clear English. Apparently, David was unhappy with the work of one of our sub-contractors and had instructed him to rectify the work. The sub-contractor didn't think he had done anything wrong and had argued back. They ended up quarrelling with each other when neither party wanted to give in.

At the end of my explanation to Jim, I looked at David for confirmation, `Am I right, David?'

`No problems, David,' I said. `I'll settle this matter for you.'

In all honesty, my sub-contractor probably got into an argument with Mr. Morgan because he couldn't understand half of what was said. If even Jim can't make sense of what David said, what more a local Class F chap?

So there's my story of an Englishman who had to ask a Malay guy what a Scotsman was saying. True story, I kid you not.
Posted by Oldstock at 17:59

Email ThisBlogThis!Share to TwitterShare to FacebookShare to Pinterest
Labels: recollections

Hey, Scots don't sound too bad!! It depends which part of Scotland they come from... :) I was there for 6 years and I just LOVE the accent (of course some people equate it to the Indians talking)! Glaswegians are rather nasty but the sing-a-song tune is just like the humming of the bagpipe.

I have heard it described as what you said. Bunyi tebal dan bergulung-gulung. Hope my Indian friends won't take offense.

So I reckon after 6 years, you can speak with a Scottish accent with no problems, eh? :-)

Heheheh... thanks for giving a good example of percakapan orang Scot.

I wasn't too bad at interpretation actually :-)

hoh! this reminds me of an australian i interviewed for an article. the moment he opened his mouth, my jaw literally dropped and i was pissing in my pants because i couldn't understand what he was saying, which had me asking the same questions over and again for the first 30 minutes.

after i got the hang of the accent, it was easy. heh.

The Scottish accent is OK. Even the Irish one is alright. But the Welsh - now, that would floor me all the time.

Aye Moira, you from Aberdeen or Edinburgh?

You weren't literally pissing in your pants, I hope :-)

I got used to the Aussie slang after watching the late Crocodile Hunter.

Heheh...funny story. My hubby is a football fan and I've heard alex ferguson spoke on tv countless times for the past 10 years but until today... sepatah haram tak paham!! :-D

Salam Bro, Jim Payne and David Morgan does remind me of the good old days when we were younger Engineers.

David does have a strange Scottish accent, some what like talking with marbles in his mouth, one need to be very patient like you to have an idea what he says. David is however a great field engineer, he solved this huge overflow problem of JB water tank overflows by identifying the flow control valves as one which needed to be repaired and maintained. Water Supply unsung Hero. Last I heard he is in Indonesia.

Kind of miss Jim Payne as well, the morning talks and the wonderful letters he drafted and wrote is a joy to read. I still keep in touch with Jim in France by letter. He does not like emails I guess.

Anyway nice and interesting blog bro. Keep it up.

If your hubby is a Man U die-hard fan, he'll understand Alex Ferguson with no problems at all :-)

Didn't expect you to read this post bro. Those days were fun, weren't they? We were lucky that the two Mat Sallehs we had tak lokek ilmu.

Hahahah. Good one, mate! And, it's true, it's sometimes hard to understand different accents until we get used to them for a bit.

Our Malaysian version of English must be hard for foreigners, as well. All those bits of Malay, Chinese, even Tamil or Hindi, and other stuff in almost every sentence!

I thought I spoke good English until the time when I studied A-levels in the UK. My class teacher had to ask me to repeat what I was saying because our style of speech was something new to him.